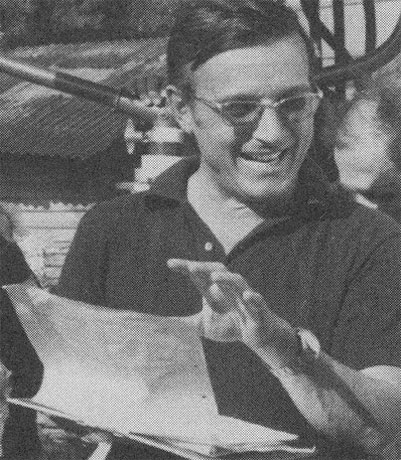 Franco Brusati was an old-fashioned Italian gentleman, exactly like those who speak French as their second mother tongue and love wearing English-style clothes, like those who never raise their voice when arguing but always have a precise idea to stand up for or communicate because of their extensive knowledge. Owing to his character and artistic flair as a theatrical author, screenwriter and film director, Franco Brusati loved the halftones, the tacit solutions, the unexpressed feelings and the essential metaphors.

He was fascinated by those people able to pour out their excruciating rage (just look at certain film characters ranging from "Disorder" to "The sleazy uncle"), but personally preferred to look for pain and frustrations always underlying it. This is proved by the tenderness and the irony of his six comedies and by the lingering shades of his eight films. This is also confirmed by the more recent reinterpretations of two films:"Whos afraid of Virginia Woolf?"(led to success by Proclemer and Ferzetti and recently set forward again by Malfatti Pani) reinterpreted in terms of a resigned habit of being defeated and Roberto Zucco of Koltès (set up during the last season by Marco Sciaccalunga), reinterpreted with the style and the rhythm of a tragic Calvary.
Born in Milan on 4th August 1920, he graduated in Political Science and Law - after a short experience as a journalist - Franco Brusati moved to Rome at the end of the 1940s.

He first came in touch with the film industry thanks to Castellani and Rossellini, who hired him as an unpaid assistant, respectively in "Under the sun of Rome" and in "Love". But the first to direct him towards screenwriting was Camerini. Brusati continued writing scripts up to the end of the 1960s always achieving very professional results (Anna, Ulysses, Romeo and Juliet) and creating some reasonably eccentric scripts (Domenica d'agosto, I dolci inganni, Una vita violenta). However, Brusati always considered his work as a screenwriter as completely unnatural because he did not think of himself as a creative screenwriter at all. Therefore, he thought of this work as a transit phase to better learn about the profession. Hence he immediately seized the opportunity that Rizzoli offered him in 1956 to become a director. His first film was "Il padrone sono me", based on the novel of the same title written by Panzini. The film's fiasco convinced Brusati, also encouraged by Andreina Pagnani, to dedicate himself to the theatre, where he immediately became famous thanks to the approval of the audience and the successful translations abroad (New York, Paris, Madrid, Stockholm).

His first comedy -"Il benessere"- allowed him to produce a film: "Disorder". After that, he wrote the scripts of "La fastidiosa" (theatre company: Ricci, Magni, Albertazzi) and of "Pietà di novembre"(theatre company: Albertazzi, Proclemer, Tofano), a play on the death of Kennedy and narrated by the point of view of his killer. Since the mid-1960s Brusati always fleeted back and forth from theatre to film making, following his free flow of ideas through his inspiration and moods. After the happy "Tenderly" (1964), he produced the tragic "Tulips of Haarlem" (1971) - an emblematic film on the impossibility and absurdity of absolute love - and the grotesque "Bread and chocolate"(1974) that was very much appreciated in the USA and presented in Paris together with the new comedy "Le rose del lago". This film made Franco Brusati the most famous Italian dramatist and film director at an international level.

In the 1980s Brusati wrote two more comedies ("La donna sul letto" and "Conversazione galante") and produced three more films: his favourite "To forget Venice", the elegant "The good soldier" and "The sleazy uncle", whose protagonists are Gassman and Giannini, effectively contrasted by an interpretative challenge. But Franco Brusati, both as a film maker and as a screenwriter, always remained faithful to the rigorous and refined style of an educated old-fashioned man. He was absolutely incapable of settling for a compromise with the market and his own conscience.

(...)
Franco Brusati was more than just an original author, he was a refined and charming man as well. At France Cinéma he became known for his charm, politeness and intelligence.
Franco Brusati was a man with a great spirit like Flaiano and he often made extraordinary comments, such as the following one on Luchino, whom he highly admired: "One has to be courageous to let a really anti-German film ("The damned") be interpreted by one of his... German lovers!?".

Once in Florence during an Italian-French congress where our politicians were accused of being insensitive to the film industry, Brusati addressed his French colleagues (Sautet, Corneau, Tavernier and others) provoking them as follows: "Why dont you ask your Culture Secretary Jack Lang to take the lead of the Italian film industry as well? We give you our modest talents, our craft skills and you French people - with an always high consideration of cultural values - can organize and protect our film industry!"

(...)
Ideologically speaking, Franco Brusati is a model without successors, a dream of the adult and aware middle class grown in Italy very quickly and lost forever in less than 10 years.

The real utopia emerging from his portraits is one of a society in which everyone is aware of their role and place in history. A society where those belonging to the decaying middle-class civilization manage to testify its values, illusions and, obviously, its defeats, too.

His society doesnt forget and knows the value of the things obtained over centuries of experience; it is never idealized, on the contrary it is dangerously deceptive. It is not a coincidence that the desire of normality of the Italian man in "Bread and chocolate" obtains in a clear but intimidating society, where peeing in public is worse than going against the law. There is no safe place for the thorny protagonist reflecting the film director: everywhere he feels out of place but he is well aware of his origins that everyone else seems to have lost.

If this is true, the only possibility is to remain consistent with ones own memory and to know that one is part of the defeated people, with no exceptions.

The model of the citizen (and perhaps of the Italian person) Brusati had in mind does not exist and maybe has never existed as a social category. This model requires a non-moralistic ethics, an observation of the rules and manners, it does not exist (today less than in the past). He seeks an excellent normality but he knows that poets are isolated in their mocked yet tolerated exceptional nature. He asks for respect but he knows he will just reach compromise, baseness and violence. He looks at us with the same sad awareness of Mariangela Melato in "The good soldier", with the same tired nostalgia of Nicky in "To forget Venice", with the young confusion of Pierre in "Tulips of Haarlem". Each of these characters could repeat the only lesson that Franco Brusati perhaps learned for himself: to remain consistent, not to deny ones own origins, to courageously show that ones intimate diversity is not to be displayed.

Sometimes one single image remains that of an artist, a way of being that goes even beyond his statements. As for Franco Brusati, we could repeat what was said for his best friend in the film industry, Valerio Zurlini: he had a sense of life, therefore he couldnt forget the awareness of death. The kind of person, the natural class, the perspicacity of his observations and the moderate use of an irony that he wanted to be strong but that he refined with his gestures and pronunciation are the things bound to remain in the mind of those who met him. His authentic memory must be sought outside a specific way of expression (film industry and perhaps even theatre).

We could think of him as the last ruin of a Renaissance man brought to silence by our time: a person constantly looking for beauty and justice, a scholar able to translate in images distant echoes of his time. That time forgotten by our miserable present days in which we pursue a dream: to overcome the useless and exhausting pursuit of vanishing goals.